Each announced NetEnt novelty is eagerly awaited and the Warlords: Crystals of Power slot (2016) is no exception to that rule. The developers once more lived up to the players’ expectations with this excellent battle-themed slot. Hopefully, luck will be at your side, encountering the Priestess, the Barbarian, and the Samurai, striving for the big prizes. 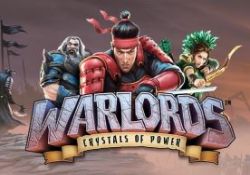 There are a few bonus features to increase your win potential, but the factual battle is fought during the Free Spins. During this bonus round, you are guaranteed to end up as the winner.

The slot comes with an impressive award of 1 mln CAD (via max stake of 150 CAD), achievable as a result of the Priestess Free Spins (or 6666x the total bet), Low-Medium Volatility and an RTP of 96.89% (which allows obtaining positive mathematical expectations of winning in the casino).

Try this slot via our link in the free DEMO version, or go for real battles with deposits at any NetEnt casino.

The slot Warlords has a huge win potential, but it seems to be all or nothing at all. Big wins, or cutting your losses. Choose your bet wisely (minimum of 1/300 of your balance). The slot reserves 70% of the total prize pool for payouts in the regular spins.

Our maximum winning during the tests was 861x. The probability of triggering any of the bonus features reaches 0.66% (statistically, every 152nd spin). Warlords don’t keep the balance well and therefore don’t fit the wagering purposes.

Review and recommendations by the testing team

The Free Spins feature is triggered when 3 identical flags land on the reels.

Lately, we get the impression that the provider made some small tweaks to the slot. When it was first released, the bonus features were more prominent and the Red Free Spin bonus round was by far the most lucrative.

Hidden parameters and settings of the slot (data from testing)

How to win at the Warlords: Crystals of Power slot machine? (Conclusion)