The portfolio of the producer contains more than 30 different titles, each of which is notable for its uniqueness and high level of craftsmanship. The fact that this software’s slots might potentially provide large payouts is a major selling point for many customers. 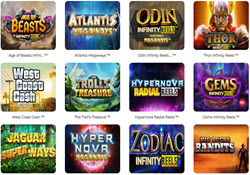 The game selection is limited to slot machines, all of which are unique in their own right. In addition to this, they have a genuine appearance and are able to extract the utmost enjoyment from the action of turning the reels. Notable among the primary benefits offered by the ReelPlay slots supplier are the following:

2014 marked the beginning of Chance Interactive’s existence. The firm first produced slots of good quality, but it wasn’t until much later that they became widely popular. In the year 2019, a decision was taken to change the name of the developer, and they began doing business as ReelPlay.

Their software was installed in over 20 different casinos and collaboration agreements were made with reputable companies. Contracts have been signed by the provider with a number of different companies, including NYX Gaming, Relax Gaming, Lightning Box, and others. The most important event, however, was the collaboration with Yggdrasil Gaming on the launch of slot machines.

The developer became more well-known following the release of the El Dorado Infinity Reels slot machine, which is distinguished by a one-of-a-kind mechanism. In addition, ReelPlay is a frequent participant in international gaming industry fairs, where it has been honoured many times for its achievements. Therefore, the firm submitted its name for consideration in the Most Successful Online Slot category when it attended the EKG Slot Awards expo.

It is important to keep in mind that the corporation is authorized to conduct business by the United Kingdom Gambling Commission. The dependability of the program is ensured by the inclusion of documentation originating from a trustworthy regulatory body. Because contemporary procedures for encrypting data are utilized, gamers do not need to be concerned about their personal information being compromised.

The bonuses that can be won on ReelPlay slots are some of the most lucrative in the industry. Due to the fact that the software supplier works closely with the industry powerhouse Yggdrasil Gaming, a significant number of gamers frequently confuse the two. A large number of players at online casinos are attracted in by the big jackpots and enormous potential offered by slot machines.

Users frequently select them, which results in significant incentives for them. Despite the fact that the games have a few flaws. They permit lengthy sequences of spins in which no rewards are awarded, and their bet return cycles are likewise quite lengthy.