In this article, we will present you with each Labrador and Newfoundland Casino. Their Games, Entertainment and Bonuses. 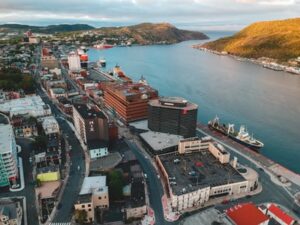 Despite some older Portuguese claiming and settlements in the 15th century, the province’s history after the 16th century, for the biggest part, can be described as an abiding British colony.

The region’s status shifted: from a colony of England, and Great Britain, to a later colony of the United Kingdom, following a period of dominion (self-governing), and finally, in 1949, it confederated to be the last joining province of Canada. Logically due to this long British dependence, the province is predominantly (97%) English speaking.

Famous for its greater than in any other Canadian province suffering from depression through the 1990s, and the impact of the 2007-2009 recession, nowadays the Newfoundland and Labrador is a calm and prospering place, with steady economic growth.

Agriculture, fishing industry, tourism, mineral and iron ore mines, oil production, manufacturing, and service industries contribute to the enlargement of the province’s funds and the well-being of the province’s population (over half a million).

The province capital – the city of St. John’s, is located in the most eastern part of the Avalon Peninsula and is famous for its brightly painted homes, and welcoming and vibrant community.

Special and inspiring sights/landmarks in the province’s capital are:

Gambling in Newfoundland and Labrador

There are no land-based casinos in the province of Newfoundland and Labrador.

Wagering/Gambling at land-based establishments are banned in the province, with the exclusion of:

Bingo and raffles are arranged as charitable projects/licenses under governmental supervision. Live entertainment is only allowed (for enthusiasts over 19 years of age) at St. John’s Horse Racing Centre, where once per week is organized a Game of Poker night – Friday @ 8:15. The only leftover legal gambling entertainment for the Canadian residents and visitors of NL are the lottery tickets and the VLT’s at some selected retailers spread all over the province.

VLT’s differ from Slots – they might have the same exteriority and play like Sots. Still, the VLT’s are connected with each other inside the system of the establishment (gambling hall, lounge, casino/racino), where players compete against each other for the main prize. In the structure of the VLT’s, there is a predetermined number of wins and losses.

The chain of VLT’s is planned to pay at a specific time or a specific amount. VLT’s – have a typical RTP (Return to Player) payout between 83 and 93%, but due to the lack of competition, they keep operating with such poor returns.

Even though the reason remains unexplained, the provincial government of Newfoundland and Labrador has imposed the most strident gambling regime in Canada. Some speculate that the local officials are watchful in preserving the province residents’ high moral values, nobility, and mental health. Who knows?

As a matter of fact, the lacking of land-based establishments boosts the demand for Canadian online casino entertainment and the popularity of Canadian virtual betting sites even more.

Online gambling in Newfoundland and Labrador

The long-since forsaken desire of the local authorities to satisfy the gambling enthusiasts with old-fashioned brick and mortar casino entertainment only threw them into the unlimited virtual casino world, making them Internet-savvy and effective. Players older than 19 years from the NL region have the opportunity to choose between domestic and foreign online gambling.

Newfoundland and Labrador residents and visitors are not banned (by law) to sign up and play at any online casino site, enrolled locally or abroad.

Countless Canadians from the 4 Atlantic provinces:

are already active virtual casino players using offshore websites ( who don’t pay taxes in Canada). An approximate calculation of the internet wagering of the residents of the 4 provinces per year is near 100 million CAD. Atlantic Lottery Corporation (ALC) created a domestic online portal – alc.ca, willing to shift the interest of some of the players off foreign sites back to the local alternative. ALC provides responsible and regulated gaming, plus the organization pledges 100% return of its profits back to the 4 provincial governments.

ALC works in strong correlation with local Responsible Gambling institutions and the government agency Financial Transactions and Reports Analysis Centre (FINTRAC). Although with noble and supporting aims, being responsible for collecting, analyzing, assessing, and disclosing information, all these institutions seem to have lost their popularity among the players. They are actually opposing the anonymity and tax freedom, that most of the players wish for.

Nowadays, thousands of virtual casinos are willing to accept Canadian players and their wagers in Canadian dollars. These casino websites are professional, legit, user-friendly, and advantageous for the players, plus the competition among them is quite intense. The only 1 local online site stands no chance to race with these foreign digital betting operators.

Here we will name just a few of the positives that the domestic online site doesn’t possess:

Moreover, these casino sites are:

All the new gambling enthusiasts residing or visiting Newfoundland and Labrador, who are baffled to find their way in the abundance of casino websites, as well as indecisive about the right game suitable in their own situation, please stay informed, up to date, and attentive where you will gamble. Just use our site for game rules, support, reviews, and special promotions – valid for our readers.