Rabcat is a company that was established in 2001 and is solely dedicated to the creation of video games for computers. In 2011, the software developer shifted their focus to the creation of software for online casinos after previously working in a different industry.

Microgaming, a titan in the online gambling industry, and Rabcat both struck a collaboration deal in the year 2012. After then, a number of further partnerships were formed, which made it possible for Rabcat to access the global market.

The firm was not granted a license by the United Kingdom Gambling Commission until the year 2015. After that, it started getting more involved in the production of slot machines that included 3D visuals. Additionally, the firm provides its software to Casinos Austria AG as well as to Austrian Lotteries.

The headquarters of the corporation may be found in Vienna, Austria. More than fifty employees make up the staff, and every single one of them has extensive experience working in the casino and entertainment industries. In addition, Rabcat is an active participant in a variety of international shows that are held specifically for the iGaming sector. The company has been successful in earning a number of prestigious awards. 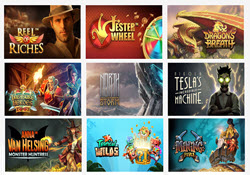 Approximately twenty-five slot machines are included in the assortment of games that are made available by the supplier. The limited variety of casino games provided is detrimental to its overall quality. Each slot is completely unique and of a very high standard. It is important to take note of the major characteristics of the supplier that set apart its slots: