Think fast and gran your fanciest swimsuit because we are about to swim with the sharks! But don’t worry – they are friendly, lucky and can bring you awesome amounts of money. Make your ocean dreams come true and press the SPIN button of the Razor Shark Slot developed by Push Gaming. Play demo
By clicking I confirm that I am 18+.
Get 15 Free Spins No Deposit Bonus
Play Razor Shark Slot at Fastpay Casino
Get Bonus Now
Detailed review about Razor Shark Slot 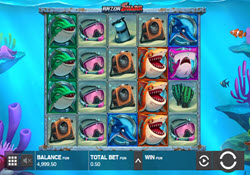 The slot comes along with a 5×4 grid and 20 fixed pay ways. The Volatility is High and the RTP is 96.70%. Set your stake between 0.10 and 100 coins. This is a real dream because the maximum winning here is theoretically infinite! The highest winning that our personal testers claimed is more than 85 000x your bet!

The slot setting is under the water and brings cool summer vibes. We are somewhere disappointed with the background because it looks more like a fish tank rather than the bottom of the ocean. But the graphics are stunning! The symbols of the Razor Shark Slot are introduced by oxygen bottles, diving fins, snorkels, and underwater cameras.

There are also swordfish, green and orange fish, and hammer fish. A deadly shark acts as a Wild sign that can replace the rest of the symbols apart from the Scatter one which happens to be a sea mine.

5 of 5
Knockout Football Rush Slot
To up