The slot’s story resembles the myriad Bollywood romantic/drama movie scripts about a young couple and the evil around family preventing their love. It is one NetEnt game released in 2015 and later converted to HTML5 in 2018. The opinions about the Bollywood Story slot are divided – from the ones that completely dislike this sort of tacky, cartoonish video games, through the middle group, who don’t mind this Indian ornamented drama, to the last flock of players, who love, love, love it! 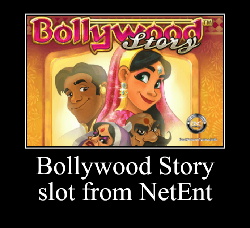 The slot has Medium Volatility with an initial RTP of 96.1%. The RTP allows obtaining a positive mathematical expectation of winning in the casino. If you want to know – one of the most preferred pages by experienced players is “How to win at Starburst slot”.

The gameplay is taken from another NetEnt slot – “Lights.” Having lucrative sessions on “Lights,” Fans span the reels on Bollywood Story but were left disappointed and did not wish to repeat.

Throughout our game test period, we made the following observations:

Hidden parameters and settings of the slot (data from testing)

Symbols and features at the Bollywood Story slot

How to win at the Bollywood Story slot? (Conclusion)

5 of 5
Elements: The Awakening Slot

5 of 5
Excalibur Slot
To up